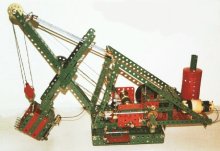 I was never destined to become a civil engineer with the toys I was given as a kid.

In my Balham flat, growing up in the 60s, there wasn’t a sniff of Meccano; although my mum was constantly hoovering up discarded pieces of an Airfix ME110 I’d scattered in a fit of pique to the four corners of my bedroom (mum was careful hoovering as she thought she might find a miniature Rudolf Hess, although may, in the sixties, have been more constructive looking for Martin Bormann!).

I only had one rectangular piece of Lego – with which I could pretend was a table, a sentry box or bench depending on which side I laid it.

So, my creative construction juices were never encouraged as a kid.   I did have a Willy Wombat glove puppet but, as anyone who’s ever watched the National Geographic TV channel will know, marsupials aren’t renowned for their construction skills (although very good at transmitting urgent messages).

So the much-needed bridge over the River Wandle was never going to materialise with me as the project manager.

I did, however, play with my Spirograph a lot, which might have been the cause of my myopia 😊