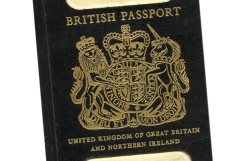 Summer holidays in the 60s did not start at Palma, Penzance nor at Puerto Banus; they began at Petty France.

A trip to London as an 11-year-old in 1968 to get a passport was exciting as we passed New Scotland Yard, where I hoped to steal a glimpse of Shaw Taylor, Stratford Johns or Officer Dibble.

The need for passports was to enable my parents and I to travel to Majorca; I couldn’t find Majorca in the London A-Z, so assumed it must be abroad.  As we waited in the interminable queue, and my parents practised their pigeon Majorcan, I wondered if there was a Significant France, which had more counters and fewer queues?

What passports don’t take into account is fashion – nor differing hair lengths through the ages.  You keep your passport for a decade and, sometime into the eighties, there was a part of people’s passports which was forever Les McKeown.

They do say, if you look like your passport photo you’re too ill to travel.  But neither can you smile; if you wear glasses you must be photographed without them. Because of retina recognition at Passport Control; if you wear glasses (as I do) you must remove them.  I now grope my way officially back into the UK like Mr Magoo!

These days passports can be renewed online.  However, there is the inherent danger of also visiting Amazon, Ocado or eBay. A consequence of which is you may receive a used passport the next day for £1, a substitute passport as they’d run out of the original or you’ve sold yourself to a man who’s coming round later to collect you!