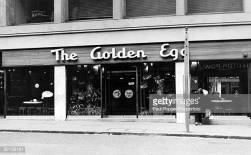 In the late 60s, years before “take your child to work day” was introduced, my Dad would occasionally take me to his advertising agency office in Gloucester Place. It was like Mad Men only set just off Baker Street rather than Madison Avenue.

I never spent a single minute in my Dad’s actual office but was relegated to the bowels of his building and put in front of a drawing pad which was bigger than me and more writing implements than the annual output of the Cumberland Pencil Company. I was in stationery heaven!

The other men in this subterranean office would have paperclip battles with one another and several people would come in and swear badly; if you’re only ten, this is hysterically funny. If they’d had a swear box in this office, they’d have been spending half the year on a cruise!

Both my parents were vituperative; these people made them look (and sound) like Mother Teresa.

Paperclips wars, more pencils you could shake a pencil-shaped stick at and gratuitous swearing – a career in advertising clearly beckoned.

At lunch Dad would take me to The Golden Egg restaurant in Baker Street.  I was a fussy eater and would only ever eat plaice and chips there.  My diet never really extended and still, for me, the mark of a good restaurant is one where the food is served with a wedge of lemon.

I miss the giant pad – I could have been the next van Gogh – only with more ears!