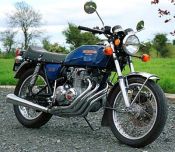 During the evening of December 24th 1978, it snowed in Balham.
It wasn’t until after I’d sung the last verse of “Hark, the herald angels sing”, and stepped into a scene from a Bing Crosby film, that I realised the change in the weather.
For a Nano-second it looked idyllic, until I realised that my transport home at one o’clock in the morning to Carshalton, was my 400cc motorbike.
The trains had long stopped running, plus my mother had warned me that travelling on the night bus was how you caught VD, so motorbike, that evening sponsored by Captain Oates, it was.
I immediately regretted not asking Santa for a John Curry annual rather than the Barry Sheene one I’d requested at the Balham Co-op earlier that month.
This was the winter of discontent, an appropriate noun as I anticipated the slowest motorbike ride ever. However, going along the relatively flat Balham High Road was fine until I reached Church Lane, which, at that moment in time, looked like the top of the ski jump at Garmisch-Partenkirchen!
I clung to my bike like Marcel Marceau fighting against an invisible wind, to the bottom, to Amen Corner (famous for its joke shop, which seemed decidedly inappropriate that evening).
From there on it’s flat and got back on my bike, thinking it must already be Easter!
I arrived back safely, only to face the return journey the next day.
I have yet to get the feeling back in many of my five extremities!