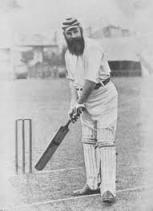 In the 1970s, when foreign travel started to take off, access to information at home was limited to your daily newspaper, News at Ten or a set of reliable homing pigeons; the lack of news, once abroad, was frustrating and people would scour kiosks in Spain and France hopeful of a two-day-old Daily Telegraph sent from Blighty.

Your holiday would be ruined, not just for NOT drinking the water or failing to take your Enterovioform three-years before your trip, but if you weren’t up to speed with the Test or County Championship cricket scores.  You wanted to be that person, like the major in Fawlty Towers, who goes back to the (almost built) hotel and announces that “Hampshire won!”

But was there that same demand in this country?

I remember the man who sold newspapers and magazines outside Balham Tube station, who called everyone “John”; was he visited by people who’d wandered off the beaten track (as Balham rarely gets a mention in any Michelin guide) looking for a copy of Paris Match (seeing how the latest strikes were going), Süddeutsche Zeitung (sending off for the deck-chair-sized towel offer) or El Pais (how many Brits had drunk the water?) and if he was, did he call them Jean, Johann or Juan?

Chalky White, whom you’d could identify and win £5 if you were carrying a Daily Mirror on holiday (invariably in Shanklin), is alive and well and waiting to be spotted in Bali.   Hope he’s taken his tablets!

2 thoughts on “Is Chris Tavaré out yet?”