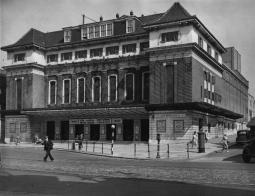 In the 60s, my mum took me twice to the Streatham Odeon: once to see Mary Poppins and once to see The Supremes.

I saw them both in quick succession and wondered, halfway through Love Child, why Julie Andrews wasn’t in the line-up?  And why they ended the concert singing Baby Love and not A spoonful of sugar?

When I saw The Supremes, Diana Ross had left the group to commence a career starting World Cup Finals and I thought I was well within my rights to expect the expert nanny, together with her magical umbrella to be on the stage singing You can’t hurry love. (This song was originally written for the 1937 Cockney musical, Me and My Girl and the version was to have been called, You can’t hurry, love.)

I’m thrilled, however, that the Streatham Odeon is still functioning as a cinema; the Balham Odeon is now a Majestic Wine House – not so much Kia Ora more a fine Beaujolais and the Mayfair Tooting is now a bank (via, in the 70s, an upmarket snooker hall – which, of course, in Tooting, is oxymoronic) and will probably end up being a pub – as most old banks do.

I suppose there is a link, as the grocer where Mary Poppins bought her sugar was called Nathan Jones.