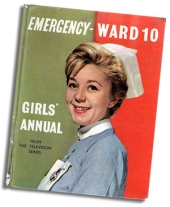 It was watching Emergency – Ward 10 that I decided I was probably not best cut out to be a doctor.  Even in black and white, blood looked pretty gruesome. However, I’m sure the ITV series which ran for a decade between 1957-1967 inspired many people to be asked “what’s the bleeding time?”

In the 60s there was precious little TV choice; even when the third channel, BBC2, was added in 1964.  Although, as a seven-year-old, this seemed to involve watching lots of men with beards sitting around talking about the meaning of life – very late at night; in the 70s, if you couldn’t sleep and turned the TV on you’d be confronted by (probably the same) men wearing tank-tops and shirts with collars nearly touching their elbows pointing at complex charts or doing unspeakable things with pipettes.

However, in south London, with careers officers at school telling you to be a secretary if you were a girl and an armed robber or accountant depending on which type of boys’ school you attended, TV could have possibly given that much-needed career-inspiration? Perhaps All Gas and Gaiters encouraged people to join the church or a Reg Varney-induced moment would have made being a bus driver appealing, although running a motel in the Midlands wouldn’t have been attractive as you’d be forever sorting out the love life of the village idiot.

TV did inspire me and, despite having often seen the actor who played Mr Verity in Balham Sketchley’s, I have enjoyed forty-plus years working in the Home Guard.