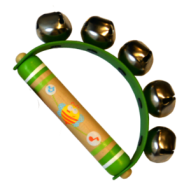 I was never going to make it as a professional recorder player; I don’t like the taste of Dettol.

I often see young kids on the train to work with musical instruments twice their size strapped to their backs. This was never a choice at my sixties primary school.

For music lessons we had to play a recorder that’s end was more chewed than the end of a pen ravaged by the most nervous person in the world.  If you were lucky you’d get to play a triangle (this smelled less of Dettol) or, if you were teacher’s pet, the Glockenspiel.  The set of hand-bells, which could have acted as knuckle-dusters, weren’t issued to the more violent kids in the class!  Whenever the teacher said the word “maracas” you’d have fifteen boys giggling to themselves (although 50% not knowing quite why).

In the final year at St Mary’s, my primary school in Balham, there was the opportunity of learning the violin. This was made attractive as it meant missing part of a maths lessons.  (I can only assume that Einstein never had access to a tambourine when a child).  I can’t do long division, but I can play Baa-Baa black sheep.

I carried on, much to the chagrin of my parents, playing the violin when I went to secondary school. I played third violin (mainly because there weren’t eighth violins) in the Bec School Orchestra.  My murdering of the third violin part of Die Meistersinger von Nürnberg would have had Richard Wagner turning in his Bavarian grave.

There was clearly no vision of any of us becoming decent musicians – none of the Beatles played the triangle; I hate to think what damage Keith Moon might have done with a Glockenspiel hammer! And there wouldn’t have been as much wonder of Jimi Hendrix playing Hey Joe with his teeth on a castanet.

The music aspect (in spite of the overriding smell of disinfectant) of music and movement classes, however, was the better half; moving about the school hall pretending to be a tree wasn’t as much fun as playing with your maracas. Although, even though I say so myself, I did make a very good larch (even if I was only wearing pants!).  I do, however, blame my myopia on over-doing the maraca-playing!