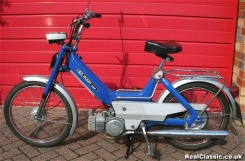 I don’t suit Lycra. I’ve not got the legs for it and a penchant for Twix and Picnic means I don’t possess the correct-sized stomach for it either.

I still commute to work. Last week I boarded the Tube at Morden; by the time I got to Clapham South I was surrounded by people clad in Lycra.  On board, not only was I the only person wearing a tie, I was the only person not sporting garish-coloured trainers.

I began work in 1974. I lived in Carshalton and would ride a series of mopeds and motorcycles to my great aunt’s flat in Flowersmead on Balham High Road.   I would ride down Huron Road and whilst stopped at the lights at the bottom of Ritherdon Road my great aunt would see me and wave from her kitchen window.  I would park my bike and drop off my protective clothing.  I was an only great nephew and my great aunt’s self-appointed task was to fatten me up as you would a goose for the production of foie gras. She would prepare a selection of breakfasts which would rival those on the menu at Simpsons-in-the-Strand.

I was invariably late arriving in Tooting and after being force-fed breakfast, by the time I got to Balham Station to get the Tube to Charing Cross where I worked, I was hoping against hope that the Northern Line had been replaced by the Japanese Bullet Train.

In 1974, as I travelled to work, I, along with virtually every other male commuter, had a suit on. My first suit was purple –  I looked more like a Bishop than an advertising agency messenger.  (I once confirmed several people innocently standing on Stockwell Station).

In 1974 smoking carriages were still in operation. A Tube train would arrive at Balham and you thought you’d got lucky as one was more empty than others.  By the time you got to Clapham South, you’d found out why.  I was never a smoker; the only cigarettes I bought had a card inside depicting one of the Thunderbirds characters   They don’t exist anymore and travelling up to town, it would appear people wearing suits don’t either.

Gyms are clearly open early in the City, either that or these fellow passengers are all competing in the Tour de France and have got horribly lost.  These days “dress down” abounds.  Most men can’t cope with “dress down” and to them, this is not wearing a tie.  On the busy Northern Line, people dressed in Lycra and wearing trainers are never going to offered a seat – they are all far too fit and unneeding.  In an effort to getting a seat on the Tube, I have started wearing a selection of badges: “I have a hernia” was one of the more successful.  I’ve toyed with “Baby on board” except I was found out when a pregnant woman suggested I’d simply eaten too many Picnics.