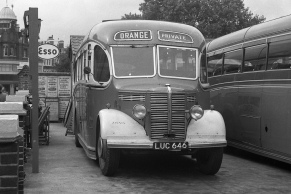 As a teenager, and because we didn’t own a car, I would spend many a Sunday afternoon in a coach, destined to a variety of stately homes in Surrey, Sussex and Kent.

We would travel with Orange Luxury Coaches from Eaton Garage, at the bottom of Marius and Balham High Roads.

I was, by the time I was 13, the only person in my class who knew that the main resident of Penshurst Place (a popular venue) was Sir Philip Sidney; several of my classmates, when talking about “what did you do at the weekend?”, thought he may have played for Red Star Belgrade.  (He didn’t, as he had a career-ending knee injury whilst writing Astrophel and Stella)

I assume the reasoning behind my dad’s thinking was that these journeys would improve me? In my opinion, watching the John Player League on the TV would have improved my leg-breaks.

The destination was always known in advance; we never ventured on mystery coach tours. One mystery to me, given, in my humble opinion, most of my fellow-travellers must be over 200, if they were a day, was how no-one ever died en route.

The coach driver would always count everyone back onto the coach. It still puzzles me to this day how we’d still not be on a 99% full coach waiting for a double centurion not to have made it back due to collapsing amongst Anne Boleyn’s begonias at Hever Castle!

Another abiding mystery also remains: wherever the destination, in any of the southern-eastern Home Counties, the journey home was always broken by stopping off at The Black Eagle pub. This pub was situated near the vaguely amusing (if you were a teenager and had borrowed his mate’s Boys and Sex book) Badger’s Mount; and near, which I always, in a child-like way thought even funnier, Pratt’s Bottom.  We could have travelled to Whitby Abbey, we’d have still visited The Black Eagle!

I believe, in the days before Sat Navs, that all Orange Luxury coach drivers were descendants of King Arthur and The Black Eagle lay, like a series of Neanderthal burial mounds in SW England, on a ley-line linking Balham High Road and Ightham Mote.

The Black Eagle no longer exists, but if there had been an eighth ancient wonder of the world, this would have been it. Should have been in the top seven as you never got chicken ‘n’ chips in a basket at the Hanging Gardens of Babylon!