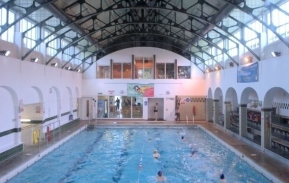 My parents were vituperative.  I heard a lot of bad language growing up.  In addition my Nan would point out rude words in the Bible (a fairly short exercise given its general message) and her sister and next-door neighbour, my Auntie Vera, was often to be heard, through the paper-thin walls, informing my Uncle Ted, her husband, that perhaps he should have “never have left the fucking RAF”

So, no real surprise that, armed with an ostensible lack of vocabulary, a rude word was destined to come out of my mouth before puberty.

My mother would befriend families who had certain skill sets I did not posses and try and impress them on me.  One such family, who attended the same primary school in Balham as me, were the latest focus of attention for my mother; this family were half-human and certainly half-fish as they were all, to a haddock, prolific swimmers.  Oddly, they all had rubbish memories too, but they did like a three-inch high deep-sea diver.

Living on the fourth block of a block of flats meant there was no real necessity to learn to swim.  To this day I’m grateful the family of swimmers didn’t try high-board diving.  This might have been tricky, we never possessed a paddling pool, but my mum did own some big saucepans.

And so it was that I was sent to learn to swim at Balham Baths – in the mid-sixties this was a swimming pool four-parts chlorine, six-parts urine.

The first two weeks were easy.  The lessons were held in the shallow end, which measured 3′ 6″ – I was a tall eight-year-old, so I felt like Johnny Weissmuller – and all I had to do was keep hold of the bar and kick hard.

Week three the bar wasn’t exactly raised, it was to be taken away.  We were to let go of the bar.  Suddenly the three-and-a-half feet depth became the Mariana Trench.

“Take your hands off the bar now, Michael” was the request of the swimming instructor.  (The name Michael still fills me with dread: Michael means you’ve not tidied your room; Michael means you’re late for you tea and Michael in this instance threatened me with my whole life flashing before me as I’m taken down to unfathomable depths by an angry coelacanth).

As the request of “take your hands off the bar now, Michael” turned into an order reminiscent of Harry Andrews in “The Hill” I looked at my imaginary wrist band (not the one they give you in exchange for your clothes) and thought “What Would Mother Do?”  I decided the course of action was similar to hers when she’d often ruined my egg and chips and told the swimming instructor that I would not “take my hands of this fucking bar”

You could have heard a pin drop except this was Balham Baths with a million screaming, splashing children and those not in the pool, intent in giving the hot chocolate machine a good kicking.

The swimming instructor walked off.  Lesson over, I assumed.  Never assume, my mother would warn me in later life, assumption is the mother of all cock-ups.

After I’d got dressed and removed the actual rubber band (and a layer of skin as it was wet and on too tight) I went to find my newly-Piscean parents.  As soon as I was reunited with them my father marched me off to where the swimming instructors gathered and forced me to apologise for my bad language.  It was fifteen years later that I used the eff word again, terrified I’d use it in earshot of an acquaintance of Mr and Mrs Sweary!

My fear of swimming never subsided, so imagine how awful it was, once at my new grammar school in Tooting, to be informed that swimming lessons happened every three to four weeks?

Oddly the school swimming baths were at Latchmere Baths in Battersea (which entailed getting about a dozen buses for each trip).  Latchmere Baths at that time was situated next to the Lambeth Coroner’s Court.  Bit ominous, I thought.

After the third trip I learned a new word: verruca.

Clueless of what one of these was, I soon discovered that, by having one, you were excluded from swimming.  I would get one of these – real or otherwise.  If Amazon had been around in 1969 I’d have ordered a box full.  (“People who liked verrucas also liked genital herpes and anything by Jackie Collins”).

With the fourth swimming lesson imminent I approached the PE master saying, “Please sir, I have a verruca” – I clasped my hand tightly to my ear as I was still anatomically ignorant of its location.  “In which case,” answered the PE master “you’d better go and play cricket”.

As I played cricket for the 1st XI (and it was the turn of the 1st XI to go swimming) I was sent to play with other pupils who believed cricket (in this case) were the entomological kind, googlies were the things we’d had checked at the First-Year cough ‘n’ drop test and a leg break could land you in A&E (provided you’d got a signed exeat from the PE master).

Despite playing, hampered with an imaginary verruca, I returned the best bowling figures ever during that year’s games days and scored 569 not out.

I still can’t swim, but I can toss up a wrong ‘un.